The current number 1 contender for the PWM championship, Owen Blanco has taken PWM by storm since his debut just over a year and a half ago. With every match and event he competed in he kept getting better and showing everyone he deserves to be one of the top guys in Pro Wrestling Malta.

Blanco made his debut on June 2018 at United We Stand, Divided We Fall event when Renik introduced him as one of his clients and challenged the then members of La Famiglia to face his opponents in two separate single matches. Connor Matthews however made quick work of Owen Blanco with a massive speak after Blanco by his manager Renik. At This is Hell-oween, Blanco accompanied again by Renik had his first major test in his hands. He had to face not one but two opponents in TJ Sky and Jack Quinn in a 3-way dance. Jack Quinn won that bout after pinning TJ Sky, however Owen Blanco made a great impression and show everyone he can keep up with the big boys.

Come 2019 and Vendetta, the first major event of the year, Owen Blanco went face to face with another PWM graduate, VARDAS. Blanco went in the match overconfident that he was going to make quick work of the junior heavyweight VARDAS. However VARDAS already had a year experience in his pocket and by being agile and keeping away from Blanco, he managed to get his first win at the delight of the crowd in attendance. Blanco was furious with the result and made a statement after the match by giving a big beating to VARDAS for ridiculing him in front of everyone.

Green-Mist finally Blanco got his first win against Hari Singh after Renik issued a 1000euro challenge to anyone in the locker room to be able to beat his client. At Collision, once again Blanco was put in a 3-way dance against Jack Quinn and BEW giant Damien, with Damien picking up the win by pinning Jack Quinn.

At Good Friends Better Enemies, Blanco was given his biggest challenge yet when he had to face former NXT star Joel Redman. Redman got the win at the expense of Blanco, however Blanco earned the respect of Redman that night. Later in the night Blanco came in at number 2 in a Royal Rumble match to determine the number 1 contender for the PWM Championship. Blanco managed to eliminate 7 opponents, which also set the record for the most eliminations in 1 rumble match, to win the Rumble and become the number 1 contender which opportunity he can cash in at anytime and anywhere.

The future is bright for PWM’s young star and we can only wait and see what Blanco plans to do with that big opportunity of his. 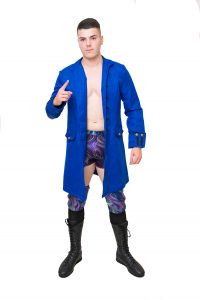